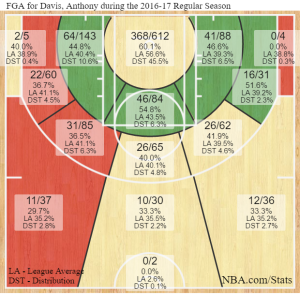 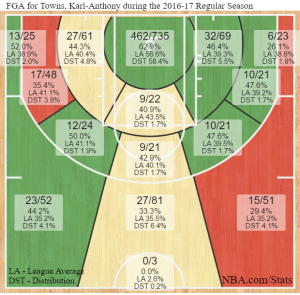 I’ve gone back and forth on this debate but my foot is down.  I’m going Towns.

This is just one play of many that I have noticed.  It isn’t even a pick-and-roll play, just a simple blow by that he doesn’t cut off.  The Nuggets perimeter defense is nothing to ride home about but still sometimes he won’t even move in the direction of the gap attack.  He’s good at one-on-one post defense but this isn’t 1999.  I like Nikola Jokic as much as the next guy but his defense is a problem that I’m not sure is going away.

Now is the time of year with March Madness officially underway that breakout performances can affect where a player gets drafted.  I’m not talking about lottery superstars like Jayson Tatum, Josh Jackson, Malik Monk or Lonzo Ball…that stuff is boring.  I’m talking about players that you’ve never heard of creeping up the draft boards.  Pro prospects that are most likely role players on the next level.  With one round in the books I’ve picked my five favorite pro prospects that you’ve probably never heard of making an impact on the next level.  It’s not out of the question that some of these players on my list become max caliber players.  But as of today, their late first round picks at best.

I love me some Mikal Bridges.  He’s 6’7 tall, 7 foot wingspan and 200 pounds, good athlete not great athlete.  His physical attributes set up nicely for a 3-and-D swing forward something that the NBA lacks.  His best skill is his defense.  Nice low stance, moves his feet well on close outs and doesn’t over extend himself.  He needs to improve on being a better help side defender and sometimes he reaches for steals but overall a sound defender.  He probably was ‘Novas best defender during their title run last year and is their best defender now.  Offensively he needs to improve his handle.  He doesn’t have any pick-and-roll skills and is more of an extra pass guy.  I would like to see him improve on attacking closeouts, work some jab steps or pivots in his repertoire.  He really is more of a straight line driver with no change of direction moves.  His 3pt shooting is his best skill on offense.  He is shooting 39.6% on 3.2 attempts per game this year from three.  Really more of a spot-up shooter, Bridges should work on his screen game and become more active off-ball.  I think he should return to school for at least one more year but since the league is in need for his skill set maybe he tests the waters.  As of now I think Otto Porter is a good comparison.

Motley has great size at 6’9 tall with a 7’3 wingspan.  Needs to add weight and get bulkier, currently at 230 pounds.  If this was 20 years ago Motley would be a PF but in today’s NBA he most likely will be used at Center.  Motley has the world of potential on defense, can be a legit rim protector.  I just don’t like his fundamentals though.  He bites on too many fakes, doesn’t rotate properly and has a general lack of awareness.  Instead of being sound he rather just time his jump for a block and use his athleticism/length to fix any mistake.  Unless you’re a sound defender on the next level you’ll ride the bench.  Then why the potential on defense?  His ability to switch onto the perimeter and guard 1 through 5 is undeniable.  Motley will be guarding Landon Lucas one possession and then Devonte Graham the next possession, well I might add.  He just needs a good coach to correctly teach him stance and how to read pick-and-roll coverages.  Offensively his shot mechanics aren’t that bad.  He needs to be more consistent with his balance, sometimes he lifts too heavily on his toes, knocking his legs off balance with his lift and using his upper body as his whole motion.  But overall he has ability shooting.  His pick-and-roll skills are what he needs to hone in on.  He needs to set stronger screens, he slips too early too often.  His diving ability is top notch; soft hands, great at finishing and attacks the gaps well.  Clint Capela with a better shooting stroke is his NBA comp.

Motley and Bridges will probably end up as late first or early second round picks.  The next three guys on my list are second round or undrafted prospects.  They all have discernible skill sets and abilities that will translate to the next level.  Williams can defend, rebound and has nice size.  His shot is alright.  I mean, he is shooting 38.2% on 1 three point attempt this season but that’s because he has a great shot selection.  If he’s pressed on the 3pt line he won’t shoot.  He’s very aware of what he can and can not do so he doesn’t force the issue.  He’s great at filling the lanes on transition, hustling for offensive rebounds and making smart reads on mis-matches.  He needs to improve his handle.  On defense he’s versatile with the ability to guard 1 through 5.  He’s 6’9 tall and even though his wingspan isn’t listed you can tell he’s long.  He does a great job at staying in front of his man, active hands, doesn’t take chances and does a great job of positioning himself on box-outs.  Williams was a college transfer so he’s going to be 23 when he’s a senior.  I don’t think he gets drafted but put him in the D-League for a year or two and I think he can become a NBA rotational player.

Who?  Most likely Shamet will stay at Wichita State for three to four years.  So even if they lose to Kentucky you should be able to follow him for a bit while he’s at school.  He’s listed as a shooting guard but he’s really more of a combo guard.  He averages 3.3 assists per game in 26.4 minutes played per.  That will serve him well at the next level since he’s only 6’4.  He can bring up the ball, initiate the offense, play off screens and most importantly shoot.  His shot is so pure, it’s probably the most NBA ready skill on this list.  He’s always balanced coming off screens, elbow in, high release point and great follow through.  He shot 45.3% from three on 4.4 attempts per game.  Adding a great shot with ball-handling skills as a combo guard will get you work in the NBA.  On defense he’s a typical freshman by making mistakes off-ball.  He has a slender frame so he gets caught up in screens more than I would like.  But he moves his feet well and hustles.  With every game you can tell he’s picking up coverages better.  Still very raw but as long as he puts in the work he should see some potentially great results.

Edwards has size and offensive skill.  He is 6’8 with a 7 foot wingspan and an 8’9.5 standing reach.  That’s great size for an NBA forward.  Unfortunately he is an average athlete that affects his overall game but primarily his defense.  He stands up while defending which doesn’t help either, if he can just get his butt down and sit he’d have a better time at moving and staying in front of his man.  His hips are stiff as a board and his effort level is questionable.  I think when he gets to the next level he’s got to get in better shape and get better pro coaching.  His offense is why he made my list.  He is shooting 43% on 3.1 three point attempts this year.  His shooting mechanics are nice and balanced with a high release point.  The only problem is the speed of his shooting motion.  Maybe he is just one lazy piece of crap but everything he does seems slow.  Nevertheless, he’s got a handle, rip through and attacking style that makes him a candidate to attack closeouts well.  Every time I watch him play he reminds me of a very, very, very, very poor mans Carmelo Anthony.  Edwards should stay in school for another year.