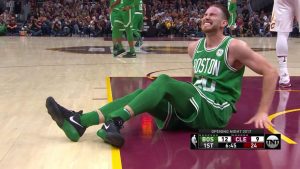 This about sums up the opening games.  With limited training camp and preseason games the level of play so far has been rudimentary; no rhythm, no flow and no connectivity.  The type of offenses are very vanilla outside of Golden State, San Antonio and Houston.  There are a lot of new faces in new places so that has something to do with it too but so far basic spread pick-and-roll offenses have been dominating the week.  Sprinkle in some floppy actions, high horns or screen-and-curl sequences and thats basically every team’s offense so far.  I’m assuming with the shorten time to practice not much got implemented in regards to an expansive play book, which makes sense.  But so far these first games have just been an extension of the preseason.

Minnesota’s offense was a classic “my turn, your turn” scenario in which one play Jimmy Butler went ISO, then Andrew Wiggins went ISO and then Karl Towns went ISO.  Understandably there are new pieces to the puzzle but for a team that has high expectations having an offense based around minimal shooting and stagnant movement with poor defensive execution doesn’t scream playoff team.  New Orleans was Boogie Cousins and Anthony Davis plus a bunch of guys who don’t fit around them.  Ben Simmons looks primed to win Rookie of the Year.  Washington is deeper and should be taken more serious.  Boston is still a playoff team even without Hayward.  Lonzo Ball is match-up dependent.  Blake Griffin is starting his MVP campaign.  Houston is really good and San Antonio still has a good defensive unit even when Kawhi Leonard sits.  Simple observations from a straightforward band of games.  I’ll assume that by November the offenses will have better continuity considering that’s when the season normally starts.

I usually pick an offensive play as my favorite play but nothing stood out.  There was well drawn up plays out of time-out’s or well executed synergistic plays, but nothing wowed me to that point of me trying to analyze it.  It really spoke to what I previously said about how these offenses are still in training camp mode.  The play I picked was on the defensive side.  It’s nothing too fancy but it was a well read play by a player who surprised me with his movement: 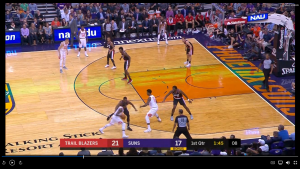 Side pick-and-roll with Marquese Chriss and Eric Bledsoe being guarded by Maurice Harkless and Caleb Swanigan.  Swanigan isn’t known for his quick feet, quick hands or defensive ability but in this play he makes a great read. 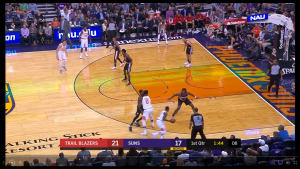 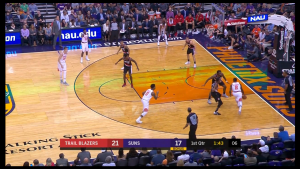 Swanigan and Harkless decide to “Ice” the side pick-and-roll with Swanigan/Harkless corralling Bledsoe and forcing him baseline/sideline. 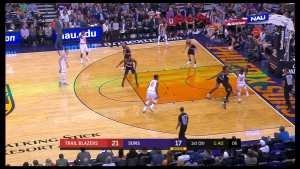 Since Bledsoe has no where to go he hops into midair looking for Chriss to roll to the basket.  Al Farouq-Aminu is help side positioned at the “nail”. 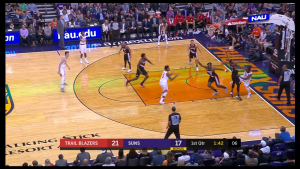 Swanigan reads the coverage perfectly, realizing as soon as Bledsoe goes midair he has one option.  But instead of walling off Chriss he makes a play on the ball. 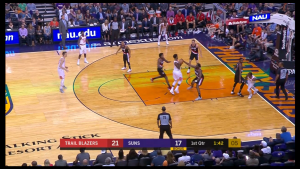 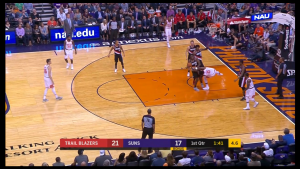 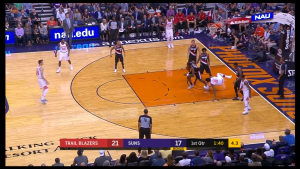 Swanigan ends up getting hand on ball, ripping it away from Chriss and starting the break.  For a rookie not known for his defensive instincts, quick feet and quick hands Swanigan sure did a good job covering a side pick-and-roll in his first NBA shift.  He took a calculated risk going for the ball since if he misjudged the pass he would’ve been out of position with Chriss likely to attack an empty lane.  It wasn’t a fancy defensive play, there were far better but Swanigan surprised me for a player who seemed like Enes Kanter coming out of college; Enes Kanter isn’t making plays like that however.