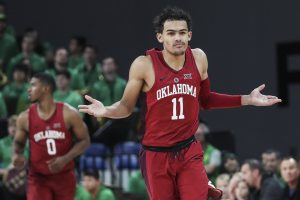 ~ Some initial thoughts on Trae Young from Oklahoma are slow down on the Steph Curry comparisons.  I really like Young a lot but I’m hearing all type of crazy buzz on this kid and from the few games I’ve seen I’d say pump the brakes.

Yes, he’s an excellent point guard prospect, maybe even better than Lonzo ball or Markelle Fultz.  Young has a great mechanics on his jump shot; except for his low release point.  When the defense commits he makes strong decisions.  He has a Lonzo Ball feel for the game; he throws it ahead to find players out in transition beating the opponent.  When Young breaks down the defense he throws pin point passes to shooters in the corner; reminds me of Lebron.  Young knows how to manipulate screens as the ball-handler; when to shoot, pass and drive.  Like I said I really enjoy his game but it does come with some flaws

Young doesn’t have a tight handle.  Its good but when the defense hedges hard he takes a wide angle around it wasting motion in the process; good defense flusters his rhythm.  He’s not that great around the basket and finishing.  His field goal percentage around the basket is 44% and his points per possession is 1.00 which ranks 745th in D1 basketball with a minimum of 50 possessions per Synergy Sports.  He needs to work both hands around the rim but mostly his left.  When Young uses a right side PnR his field goal percentage is 62% but when he uses a left side PnR his field goal percentage is 23% per Synergy Sports.  He also needs to work on his off-ball game; better at using screens, when to flare, fade, curl.

He’s still going to be a likely top three pick and he still has Damian Lillard with better passing ability potential.  Curry is generational and comparisons at times can get out of control; I’m looking at you Bill Simmons (Tweet).  This upcoming draft is weak when it comes to point guards so he’ll for sure be off the board quick.

~ BREAKING NEWS: Russell Westbrook is really, really, really good.  Over his last five games he’s been averaging 33.8 points, 11.8 assists, 8 rebounds on 52% from the floor.  Paul George over his last five has been averaging 27.8 points per too.  The Thunder have now won eight in a row and from an outsider looking in the Thunder pose a real threat in the West.  I’m still not there yet.

~ I don’t think this is breaking news but Ty Lue isn’t a good coach.  The Cavs major problem entering this season was defense, in particular transition defense.  And his solution?  Put Kevin Love at center.  Oh good grief.

It’s only been two games but the Cavs do look better since the switch back to Tristan Thompson at center.  Thompson runs the floor (sometimes), sets good screens, has a good repertoire with Lebron at finding the angles on his dives and brings toughness back to a soft defense.

Is this enough for a turnaround?  I mean they could’ve done nothing and still win the East.  The Cavs problems are inherently worse than some lineup change.  Possibly getting George Hill will help but against the Warriors it’s a cupcake move.  This really has the makings of Lebron leaving this summer.  I know there’s a lot of speculation out there with no substantial basis but Lebron really should stay in the East.  Even if he went to the Rockets it would have to be at the cost of players like Clint Capela, Eric Gordon, Trevor Ariza and maybe you make it out of the West.  Going to teams like the Knicks or even Philly make more sense.

~ The Sixers lost yesterday to the Thunder but I still really like the Sixers.  I think outside of Boston they pose the biggest threat to beating the Cavs.  No….I don’t take the Raptors seriously.  The Sixers have shooting, ball movement, player movement, well executed after timeout plays, long lanky versatile players that can switch 1 thru 5 and two budding superstars.  They need to work on closing games, holding leads, taking care of the basketball and limiting the amount of stupid fouls.  They aren’t consistent for a reason…youth.

I’m starting to write up a longer piece on why I think Philly could be a dark horse but I want to watch more games.  Health is obviously important and when Embiid plays the Sixers have a net efficiency rating of the second best team in the league and when he doesn’t play the Sixers have a bottom five efficiency.  We’ll see what the team does about Embiid playing back to backs, JJ Reddick should be coming back from injury soon and who knows what’s going on with Markelle Fultz.  They need to make the playoffs first and even though they are young the Sixers have the personal and style of a maturing title team.

~ I really don’t like fixating on the MVP topic but this year is really interesting.  No one is running away with it or there is no two man race like years past.  An argument can be made for five to ten players.  Steph Curry, Kevin Durant, Lebron James, James Harden, Giannis Antetokounmpo, Al Horford, Jimmy Butler and Russell Westbrook.  Heck I can make arguments for Victor Oladipo, Klay Thompson, Joel Embiid and Demar Derozan.

As of now I think Harden would probably be the consensus choice but if Curry continues this level of play since December first than I’d go with him.  Since December first Curry is averaging 30.8 points, 6.8 assists, 5.1 rebounds on 54% from the floor and 50% from three on 11 attempts per game.  The excuse that the team has so much talent that they cancel each other out does hold some weight and Curry did miss a two week stretch of games.  But the identity of the Warriors is Curry.  His gravity stretches the court horizontally and vertically, his screen setting causes major confusion in opposing defenses even when he doesn’t shoot.  When Curry is at his best, in a league full of adjustments, there’s nothing you can do to stop him.