I’m either going to do a write up or podcast previewing both conference finals but I wanted to briefly break down the sequence of events that lead to Boston beating Philadelphia in five:

Personally, I would’ve called an offensive foul on Dario Saric but I was fine with the no call.  Even though Marcus Smart seems like a mismatch in the post for the 6’10 Saric Smart keeps a strong base, doesn’t bite on the rip-thru and frustrates Saric into a forced back down.  That’s not quite the efficient look I would’ve ran with 43 seconds left.  Horford gets the loose ball, starts a break and wisely kicks it out to Terry Rozier.

Brad Stevens doesn’t call a time out to draw up a play and instead trusts his players during crunch time.  Rozier and Horford proceed to set up a side pick-and-roll.

JJ Reddick and Joel Embiid do what most teams run when covering side pick-and-rolls and “ICE” the action; using the sideline/baseline as an extra defender.  And while Saric is technically in solid position I personally would’ve been more aggressive on the coverage.  Instead of zoning up between Horford and Smart I would’ve denied one pass away and forced Rozier to lob it over to Marcus Smart above the break.  Smart is a worse three point shooter than Horford and the extra time for the pass to make its way over to Smart increases recovery time on rotations. 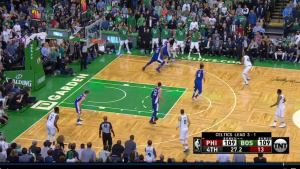 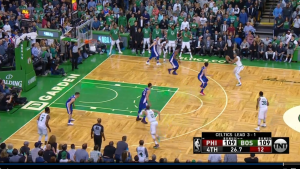 But with Saric zoning up Rozier delivers a bounce pass to Horford starting a sequence that lead to the go-ahead bucket.  You can already see Jayson Tatum start his move to the basket with Ben Simmons ball watching. 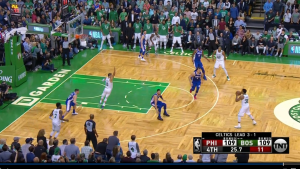 Smart play by the rookie.  Tatum anticipated the ball reversal and with Ben Simmons ball watching Tatum backdoors to the basket. 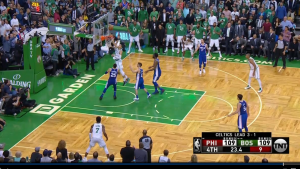 TJ Mcconnell did the best job he could on the help but the play was unsalvageable.  The next play was a missed layup than turnover by Joel Embiid.  There might have been a foul on Embiid’s release by Aron Baynes but that’s a tough call to make at the juncture of the game. 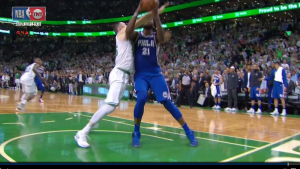 I really liked this play because it felt like a microcosm of the series: even though the Sixers had more talent, when it came time to close the game the Sixers either committed unnecessary fouls, terrible turnovers or boneheaded mistakes.  Overall this was a bad matchup for the Sixers. Having Horford as Ben Simmons kryptonite, length/athleticism on the perimeter minimizing space for the shooters and Embiid having his troubles in the post knocked Philadelphia out of their rhythm.

The Sixers still have a bright future and I’ll eventually do a write up about their possibilities this off-season.  For now….Cleveland vs Boston.