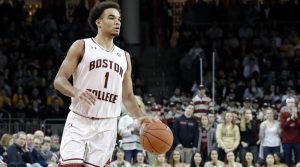 Ever since the draft I really wanted to do a legitimate scouting report for Jerome Robinson.  He was the biggest reason why I didn’t like the Clippers draft and yet I’m a huge fan of Shai Gileous-Alexander.  I thought there were better players to draft at pick 13 and wondered if it was a wasted opportunity.  Robinson wasn’t a player I took into consideration for my top 20 prospect rankings so I didn’t do my due diligence properly and knew very little of him to begin with.  I want to do a more comprehensive breakdown so I can give a more informed guess as to what I think he could become.  As of now I think the Clippers should’ve drafted players like Miles Bridges, Lonnie Walker or Zhaire Smith over Robinson.  After this scouting report I’ll decide whether I still agree with that sentiment and how I feel about the Clippers draft now that I’ve broken down his tape some more:

To start off with his physical profile it may be average or even below average.  It’s never a good sign that a projected late first round or early second round pick doesn’t go through the athleticism testing portion of the NBA combine.  For instance Robinson’s agility, shuttle run and 40” vertical could’ve validated the perception around the league that he isn’t a good athlete.  But from what I’ve seen on tape he does actually have surprising hops for intended alley-oops but overall displays average at best foot speed, recovery time, burst and length.  Being an amazing athlete isn’t the end all be all for NBA success but it sure does help when you’re on an island defending top notch isolation players with no help behind you.  The way players like Robinson without a great physical profile make it through the NBA is high IQ, fundamentals and functionality.  Robinson will be a nice litmus test when comparing functional athleticism and actual athleticism.  Robinson might not perform well when it comes down to athletic testing but that doesn’t exactly mean he won’t display quality game speed at the next level.

On offense the first thing you have to start with is his shooting.  I’m assuming that’s one of the biggest reasons why the Clippers drafted him shooting 40.9% from three his junior season and 1.066 PPP (points per possession) on all jump shots off the dribble which ranked 91st percentile.  His shot mechanics are sound for the most part; dips around the waist, dead eye set point, nice sway, with some inconsistencies involving his follow thru motion.  At times it will be an extended upwards release with a high point, other times it will have an “out” motion with more wrist action.  He did shoot 33% from three his sophomore season so being as consistent as possible with his follow thru will be key moving forward.  To step into his shot he uses the hop or 1-2 but mostly uses the 1-2; will that affect the timing of his release at next level?  He’s a well versed shooter at pull-up, off dribble, catch-and-shoot (1.186 PPP, 77th percentile) or spot-up jump shooting.  He doesn’t use his all-around shooting skill to his advantage off-ball as much as he should though.  He does a good job relocating off ball and filling the gaps for extra passing angles but doesn’t use his gravity to affect spacing whether that be off screen, cutting or being the screen setter.  When a defender lock-and-trails his off ball movement Robinson will use head fakes or hand swipes to create more distance between the two but due to his lack of strength/athleticism needs to be more concise with his footwork and actions to use his off-ball gravity to his advantage.

Robinson will utilize pump fakes the most while attacking closeouts but uses a variation of pivots, rip thrus, step-backs and pull-backs to create separation.  When Robinson drives the lane he narrows his hips and becomes more shifty then one would expect with average athleticism using hang dribbles, crossover moves, in-and-out dribbles and a behind the back handle creating shots for himself in the process.  He needs to develop more combo moves after his initial counter if he wants to get his man leaning for a beat.  He lacks a quick first step off the bounce and can be sloppy with his handle not being precise with his motion.  His handle needs to improve in transition also.  He’s more of a straight line driver when it comes to transition, when a defender walls off his fastbreak lane he struggles to side or euro step.  Would like to see him use jump stops more often.  Robinson has shown trouble dribbling versus length and athleticism but is pretty proficient with either hand helping add to his shimmy.

As a pick-and-roll ball handler Robinson was one of the most efficient players in college basketball last season sporting a 1.041 PPP on those type of plays which ranked 94th percentile.  He did a good job reading weakside coverage looking for lobs, over-the-top and pocket passes.  Sometimes though he will keep his head down and get stuck baseline with nowhere to go forcing a mid-air jump pass back out.  On pick-and-roll drives he will pick up his dribble getting stuck in no mans land as well, needs to keep head up and continue his dribble as much as possible.  Even though he isn’t the greatest athlete Robinson can create off the bounce using his change-of-pace, change-of direction dribble moves looking for dump or drift passes.  Robinson will take some risky passes, overall he had a 1.14:1 assist-to-turnover ratio for his entire college career which isn’t amazing but solid.  Robinson needs to add more finesse to his around the basket game with more inside hand, inside foot layup attempts to get defenders off rhythm.  Adding floaters, reverse layins, finger rolls, push-shots and hook shots to is game will be paramount for finishing against NBA length.

Defensively Robinson really is a mixed bag.  He’s does a fine job reading weakside pick-and-roll coverages by bumping the roll-man and recovering to his own on time.  Although on his closeouts he needs to be more balanced with better angles taken due to his lack of quickness.  From time to time Robinson will float on defense and lose track of his man; needs to stay focused of his man off-ball.  Robinson is a little too flat footed on rebounds, doesn’t attack the ball while it’s in the air or fight for position; tends to run back more often.  Robinson might have on-ball defensive troubles at the next level.  As soon as Robinson’s hips open up guarding the dribble it’s tough for him to recover because lack of physical profile.  His ability to switch will be questioned as well.  Can he stay with quick point guards?  Can he guard bigger wings?  Can he bang with frontcourt players?  He needs to get stronger if he wants a chance at that plus fighting thru screens wasn’t a strong point of his either.  When Robinson is at his best defensively he gets his butt underneath him, arms balancing his core, not reaching and sliding his feet with anticipation.  Still, an argument can be made that out of the three seasons Robinson played at Boston College only this past year did he show he can defend at an NBA level.

Now that I’ve had time to thoroughly breakdown Robinson’s game do I still think the Clippers should’ve drafted Miles Bridges, Zhaire Smith or Lonnie Walker?  My answer is yes.  Robinson doesn’t offer the two-way potential with switch ability and pick-and-roll coverage versatility that those other players do.  Do I still think dislike the Clippers draft?  Even though I still would’ve taken a bunch of players over Robinson, doing this scouting report makes me understand why the Clippers drafted him in the first place.  His pick-and-roll skills, ability to shoot off the dribble, passing, three point shooting and high IQ on defense makes me change my mind towards my original assessment about the Clippers draft.  I’m obviously still skeptical of the Robinson selection but there’s less doubt today than there was yesterday.