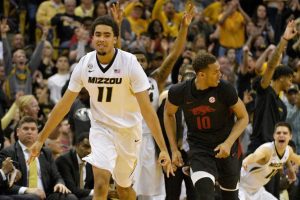 After last season Jontay Porter decided to enter the NBA draft and participate in the draft combine.  He ended up withdrawing his name from the 2018 NBA draft and returning to Missouri for his sophomore season.  During the pre-draft process many NBA draft websites had Porter as a first round selection, some even lottery bound.  Now that he’s projected to enter the 2019 NBA draft these same websites have Porter as a lottery selection in what amounts to a potentially weak draft.  I really didn’t watch Missouri games last season except for the Michael Porter games, so my level of Jontay Porter knowledge is novice like.  With so many draft websites that I respect having Porter as a 2019 lottery pick I decided to go over as much game tape as possible, breakdown Porters abilities and determine if he really warrants a lottery selection next draft:

Jontay Porter has good not great length for a center standing at 6’11.5” but with a 7’.025” wingspan.  His 9’1” standing reach could be his most important physical attribute since it helps him cover ground best in comparison to his lackluster athleticism.  Porter has a 13.85% body fat percentage worst at the 2018 combine.  Porter was out of shape as a freshmen and is partial reasoning as to why he didn’t play more minutes.  Draymond Green serves as a good example of a frontcourt player who suffered from weight issues and redefined his body at the pro level.  Reportedly Green lost about 20 pounds from his rookie to sophomore season with the Warriors (Link).  Green was also a senior when he came out of college and Porter will be a sophomore giving more time for Porter to make enhancements to his diet and exercise.

Porter is going to need to be in better shape at the next level if he wants to make up for his lack of recovery speed.  Porter was in last place at the 2018 combine when he ran a 3.40 three quarter sprint. Testing his foot speed Porter ran the eighth worst lane agility test at 11.90 seconds.  Porter did score well at the shuttle run so he does have solid body control and change of direction.  To cap off his below average athleticism Porter had the worst max vertical with 31”.  Porter is subpar when it comes down to lower body explosion, back foot burst and lateral movement.  Porter is another candidate for functional athleticism versus actual athleticism.  Clearly not every great basketball player was a great athlete.  Testing well at the combine versus game speed aren’t mutually exclusive abilities.  However the danger lies in the fact that the position of center is increasingly becoming harder to play if you lack actual athleticism.

Even though I have Porter listed as “PF/C” it would be in his best interest if he played center at the next level.  As a center shooting is becoming more relevant in today’s NBA and Porter looks to become apart of the growing trend.  He shot 36.4% from three, 75% from the free throw line and posted a 1.153 PPP (points per possession) at all half court jump shots which ranks 88th percentile.  His shooting mechanics for a bigman are very encouraging; shoots lefty, feet are tilted on the load and sways on the follow thru to generate power, doesn’t strain shoulders for distance, dip is pretty quick around the stomach area at times, inconsistent set point and follow thru.  Sometimes the set point will be below the eye and the next it will be above the eye, needs to find a repeatable spot.  His follow thru is either an extended upwards release or a short choppy wrist motion. As soon as he finds harmony on those motions Porter should become an even more reliable shooter.

He doesn’t have a face-up game or can create for others off live dribble yet.  His handle is actually solid for a man his size using crossovers and spin moves off the bounce but he doesn’t bend the defender with his live dribble.  61.7% of his shot attempts came from spot-up, post-up or roll-man type actions.  He’s a good screen setter that doesn’t shy away from contact.  Tends to pick-and-pop mostly, rarely dives.  Out of 66 roll-man shot attempts he finished on a dive only 9 times.  Since he doesn’t have lower body explosion, a quick second jump or a large catch radius he becomes more planted on his roll attempts.  He has to use his timing and manipulate the gaps between the ball handler to his advantage if he wants to become a good roll-man at the next level.

If he has a mismatch on a roll or switch he will instantly get the smaller player on his hip, seal the player and take them down to the block for post entries.  When in the post he uses over the shoulder flick shots, hook shots, dropsteps and fadeaways but can become too left hand dependent at times.  He uses pivots and pump-fakes to create separation in the post sporting a 1.114 PPP on all post-up attempts.  But he’s not very good around the basket (not including post-ups) sporting a .911 PPP which ranks 18th percentile. The problem I’ve noticed is that he will scrunch his shoulders, narrow his body and act smaller then what he actually is due to overusing pump-fakes.  He doesn’t have much lift or a quick jump so he tries to get his man off his feet first before he goes up.  He definitely needs to get stronger, use his shoulders and the rim as his protection.

His specialty on offense is by far his passing and high IQ.  He uses his basketball IQ at passing from all angles on the court and will make incredible one handed pocket passes in transition.  When in the post he will read the double or dig and kick it to the next man on the swing.  He reads the weak side tag-man so well and kicks it to the opposite corner as soon as he notices the defender motion middle. He’s great at high to low post feeds and hardly ever catch-and-holds the ball; is a willing ball mover.  He also uses his IQ reading a defenders actions; cuts to the rim as soon as his defender turns his head or slips the screen on a switch.  Porter is also a great rebounder attacking the ball mid-air.  He may not have the hops but times his jump and fights for position before the opposition gets set.  He is a hustle player that produces second chances.  Porter is the kind of player that even though he didn’t grab the rebound himself his attack of the glass or box-out will lead to one of his teammates getting the board.

Even though we have established that Porter is a below average athlete he was a plus defender his freshman season.  He still has his defensive flaws like not being able to contain penetration, lacks lateral movement on switches, can be too grounded at times and isn’t versatile at pick-and-roll coverage; overuses drop coverages.  Those are definite question marks when talked about at the next level.  But there still is a lot to like.  For starters his communication is amazing being able to point out actions, direct players on rotations and sniff out any misdirection.  Porter may be prone to getting beat at the point of attack but if he can sink his hips and stay with the ball handler since he has enough change of direction ability to distort angles and contest drives at the basket.  He does a fine job staying in an athletic, low stance with good balance at all times.  Sometimes he needs to do a better job closing air space on the perimeter attacking closeouts; can be late on rotations due to lack of quick twitch movement.  He does a good job walling off drives, helping the helper and staying vertical.  He uses his great hand-eye coordination and anticipation on weak side blocks and well timed swipe downs resulting in 4.1 total steals/blocks per 40 minutes.  However he can get too handsy at times and will overextend himself on shot attempts fouling 4.8 times per 40 minutes.  His upside might be limited on defense but uses his IQ and functional athleticism to defend at a high level.

So now that I had time to digest my breakdown do I think Jontay Porter is a projected lottery selection for this upcoming draft?  If he had come out this past draft the answer would be no.  This upcoming draft on the other hand looks to be weaker than normal.  Porter looks like a Kelly Olynyk type of player: an unathletic big who can shoot threes, pass, screen, dribble hand-off and be sound on defense.  Although I think Porter has more upside then Olynyk the fact is they are solid glue-guys and role players.  As of now the 10-20 range is probably where I have him spotted.  But there is a new crop of players coming in and random prospects always pop up out of nowhere.  This is a discussion that’s tabled for now and will be re-examined for another day.