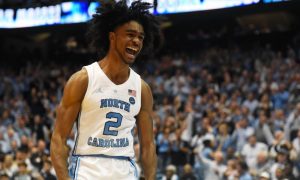 Coby White is one of my biggest movers on this ranking.  A lot of that has to do with his scoring prowess.  For this draft class Coby has top level scoring instincts, can shoot threes in a variety of ways and is an improving play maker.  Being long, athletic with a good frame is great for potential but if you can’t dribble, shoot and create for yourself then that potential’s value is cut in half.  Even though Coby is listed at 6’5 he doesn’t have that big of a frame.  His shoulders are pretty slight with average size hands and a build that might not fill out.  The hope is that over time he will develop strength albeit with a slender frame.  His physical advantage is speed and quickness.  Coby might even be faster than Ja Morant but doesn’t have the vertical explosion to match.

Coby might not be an above the rim player but has craft and touch in his arsenal.  He shot 67% on all his attempts around the rim and only 17.9% of those were assisted.  He can change hands mid air on lay up attempts, go up-and-under for stealthy finishes and put soft english on the ball to fit over longer players.  He’s a decently versatile leaper around the rim with same foot, same hand lay in’s but tends to jump off two feet around rim.  I think as soon as he gains longer body strength he should use one footed leaps around the rim more frequently.  He has a quick first step with speed down hill with a multitude of hang dribbles, push crossovers, behind the back moves and hezi jimbos.  His sudden stop-and-go movements get defenders leaning and his blazing speed gets himself into the lane.  When he gets into the lane he likes to use a left-to-right spin move for separation and uses his momentum wisely to carry his body in space creating angles whether that be on step-backs or fallaways.  Unfortunately his handle can be too high, leaving the ball out in front exposed for deflections.  He needs better control and a steadier center of gravity.  Moving side to side can be an issue as well as White can be loose with his dribble.  As I said earlier, the hope is that additional core strength will improve control.

White is a score first guard that needs to see the court better but can make plays off the pick-and-roll since the game is slowed down.  Possessions that include passes off the pick-and-roll, White sported a 1.407 points per possession which ranked 97th percentile.  When he gets sped up White doesn’t see the court as well as he could but with a ball screen he does a good job looking for cutters and weak side action with one handed skip passes on occasion.  He can turn the corner off a hedge even with a dribble that’s high but what’s most impressive are his splits through doubles or hedges.  That was probably one of the first things I noticed about White, his ability to split pick-and-roll coverage’s.  That’s such a useful move to get the offense a 5-on-4 advantage on his way to the rim.  Although when he did split the coverage when he pulled up off the dribble White sported a .629 points per possession which ranked 27th percentile. Having better shot selection, more strength and body control should help with his off dribble game.

Just like with Ja Morant, White has a lower release point.  White had an inconsistent release point though and at times it was as low as his chin and as high as over his head.  Having a fluid set point definitely quickens your shooting mechanics but unless you get the ball high enough on the follow through and develop core strength then the shot may be prone to contests.  Luckily for White he does a good job of step backs, pull ups and momentum altering shots that create space to get the shot off.  He also sported a 1.339 points per possession on catch-and-shoot situations which ranked 93rd percentile.  Even in a limited fashion at North Carolina White displayed good instincts off-ball.  He set good cross and up screens plus pin-downs using his shooting gravity at times to distort the angles of the court.  He was more active off-ball than Morant and it’s something that I think is underrated when talked about Coby White.

White also tried on defense unlike Morant did this past season.  Coby isn’t the biggest, strongest or most vertically explosive player but he gave multiple efforts, fought over screens and used his quickness to his advantage.  Yes, when he did get caught up in a screen it took him time to recover but remarkably White did a solid job whipping his inside foot over screen setters to get skinny over screens.  He would then stay attached to the ball handler and hustle even if he was behind some.  White was actually a decent team defender collapsing middle on drives, walling off weak side attacks and cutting off drives at the nail then recovering back to his own.  Sometimes after making the initial rotation Coby would get stuck in the muck and at times he missed his sink-and-fill assignments but overall Coby was an above average team defender.  His quickness allowed him to stay in front of players but at times he over gambled and lost position.  Playing on his toes more, working on his lower body and strengthening his butt would help in terms of on-ball defense.

The importance of creating a shot for yourself can’t be understated.  It’s obviously important to have other skills and a baseline of NBA athletic ability but during the playoffs players who can’t dribble, shoot and create buckets for themselves are impossible to play.  White got better as the season went on and considering we’re talking about ACC play that was highly impressive.  I don’t know if White will ever be a starting point guard on a title team but can he be a highly productive rotational piece on a title team?  I think so.

* All stats provided by Synergy Sports Tech and Hoop-Math*