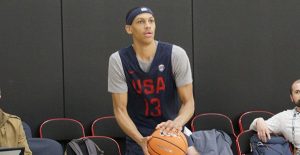 ~ Sometimes you have to put your name on a couple prospects.  Especially in a draft as uncertain as this one there seems to be a few potential gems hidden outside the lottery.  That’s where Darius Bazley steps in for me.  He was the 13th ranked player coming out of high school by ESPN and decided to skip college and play in the g-league.  For whatever reason, he changed his mind about entering the g-league and planned to work on his body and skills leading up to the draft.  I obviously didn’t know much about him until I saw his performance at the NBA combine 5-on-5 scrimmages portion.  What really impressed me was the fact that he was 19 years old, hasn’t played organized basketball in over a year going up against a bunch of players who were 19-23 years old who just played college basketball 2-3 months prior and became one of the standouts nonetheless.

He stands in at 6’9 with a 7’ wingspan and an impressive 8’11 standing reach.  He also proved to be a bouncy athlete with a 37 inch max vertical and quick change-of-direction potential sporting a 2.95 shuttle run which was sixth best.  The thing that got me to start taking Bazley more seriously was his handle.  He had a pretty low, tight and in control handle with combo dribble drive moves.  He took players off the bounce with either a pump fake or decently quick first step.  He made turnaround two point jumpers, one dribble pull-ups and and-1 buckets.  He was quick off his feet for offensive putbacks, reverse layups and one-legged lay-ins.  His passing ability took me by surprise too.  It wasn’t all good with some forced passes and misguided transition throw aheads but he did make some standout plays.  One of them being an off-the-dribble behind-the-back pass to Ignas Brazdekis and the other being an off-the-bounce drop off pass to the man at the dunker spot.  When I watched some of his high school tape he showed pretty solid passing skills, it’s the instincts that need to improve.

His left-handed long distance shot looked workable.  I watched some of his high school games at Princeton (OH) and his mechanics have definitely improved since.  In high school they were really slow, his elbow had inconsistent arrangements and the shot came out at an angle.  His shot at the combine was quicker, his elbow placement was much smoother and the shot was actually lined up with the basket.  Obviously he still needs to tinker with his mechanics but making progress at this young of an age is a positive indication of shooting success.

He was a decidedly better on-ball defender than team defender.  At times he missed rotations, misread angles and lost his man.  His ability to cover ground in a timely fashion does give Bazley upside as a developing team defender and considering this was his first organized game in over a year it’s tough to judge but questioning his feel for the game is an inevitable concern.  On the other hand he was defending smaller, quicker players well, had a solid time playing different pick-and-roll coverages and was able to defend in the post. His long lanky legs gave him a big base to work with and his wide shoulders shoulders should fill out over time.  Add that to his length and athleticism and we’re talking about a potentially versatile swing forward on defense.  There was one play where he pressed the ball handler on a side pick-and-roll, the ball handler threw a pocket pass to the screener slipping, Bazley recovered well, picked up the screener at the free throw line and contested a post attempt for a miss.  That one play alone showed why I think he has tremendous upside on defense.

The transition to the NBA will take time.  His last taste of organized basketball was a year ago in a high school gym.  It’s probably going to take him at least a season or two to acclimate to pro speed.  On a few instances during the combine it looked like he was averse to the physical nature of the game.  Gaining strength and bulking up will be very important for Bazley.  He did just turn 19 years old.  As long as the franchise who drafts him is patient then they could reap major benefits.  Is ranking Bazley at five too high?  Probably.  But with so much skepticism towards this draft a player who is long, active with quick feet, has a budding shot, solid handle and passing skills…well, that sounds like a player to take a risk on.